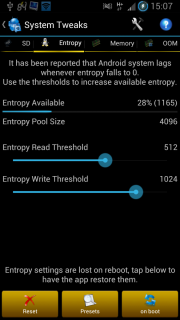 This is a test screen, about a subject much discussed on XDA forums, in which results varies from device to device. Opinions vary a lot on this subject as seen here on XDA. However, 3C Toolbox or 3C System Manager use a passive method to configure the kernel contrary to Seeders being discussed on XDA, hence should not affect deep-sleep or CPU in any ways.

WARNING: Some kernels have buggy random number generators (RNG) that if the write threshold is too high will have a kernel process start consuming a lot of CPU even though the entropy buffer is full! Please check task manager to make sure no sure kernel process is affecting your device after setting entropy here.

What (IMO) entropy means on Android: Entropy is a measure of available random numbers. When available entropy is 0, no random number is  available for reading, and all operations depending on it are halted.

The idea is that simple: Keep entropy high enough to never fall to 0.

The app (Seeder) on XDA uses a dedicated service to raise entropy constantly. Android Tuner does not run in the background to control this, instead it sets 2 particular settings that define how the kernel manages entropy. Most kernels do handle those properly, however it's possible that it starts behaving heratically as noted above.

Nexus 4 - Entropy goes to 1 during screen-off, no particular lags in the first place and cannot raise entropy past 200.

Galaxy S3 - Entropy can be raised to 3000+, scrolling through big lists seems smoother

HTC Sensation - Entropy can be slowly raised to 2000+, scrolling seems smoother too.

Any questions? Please write to 3c@3c71.com and ask your question.